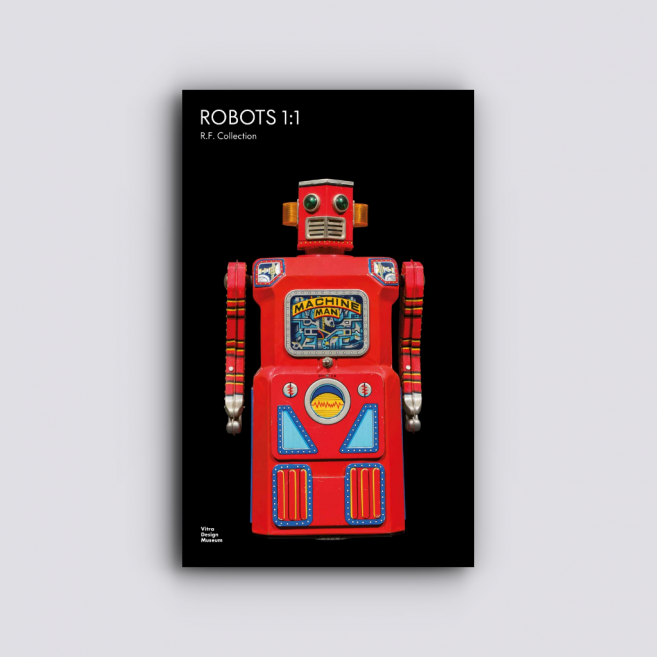 Collectible "kinetic sculptures" from bygone visions of the future

This enormous volume explores the 148 space-themed toys in the R.F. Robot Collection held by the Vitra Design Museum. Largely produced in Japan between 1937 and 1973, these figures of robots (and the occasional astronaut) have been carefully researched and compiled over the years by Rolf Fehlbaum, former Chairman of Vitra and founder of the Vitra Design Museum, who describes them as "small kinetic sculptures of great originality."

Ever since the term's first appearance in Czech writer Karel Capek's science-fiction play R.U.R. in 1921, robots have both served and taken over the work of humans, creating human dependency and, at times, a shift in the power dynamics of a society. ROBOTS 1:1 is unique in that it shows the toys and their original packaging (where available, as it was seldom preserved) on a scale of 1:1, with the largest robot determining the size of the book. This conveys something of the uncanny nature of the robots and their general ambiguity, while the vivid illustrations on the boxes give an idea of the futuristic fantasies developed over the period.

ROBOTS 1:1 is limited to an edition of 1,000 copies, numbered and signed by Rolf Fehlbaum. A USB stick with a film by Luka Dogan, showing a selection of robots in action, is integrated into the spine, while a poster featuring 80 robots in chronological order of their release is also included in the book.